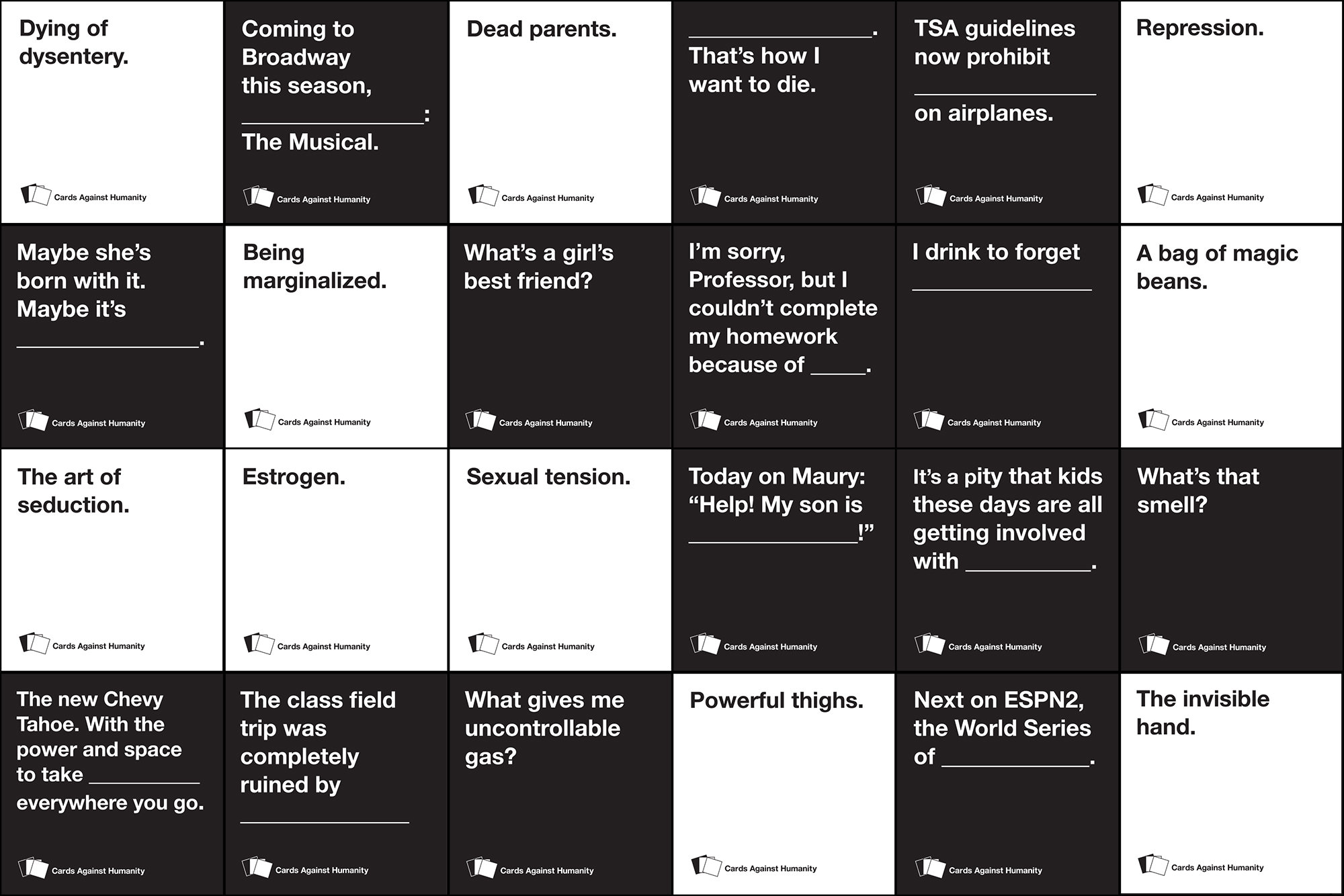 Cards Against Humanity is a card game created by multiple designers (Josh Dillon, Daniel Dranove, Eli Halpern, Ben Hantoot, David Munk, David Pinsof, Max Temkin, Eliot Weinstein). The suggested age group is 17+, which makes sense because if the game were a movie, it would be R-rated for mature and sexual content. I gather that the target audience is older teens and young adults who are in touch with culture since many of the cards contain references.

The game box says it can be played with 3-20 players. Three is the minimum because there needs to be a judge and at least two players to play against each other. To start, everyone draws 10 white answer cards. The starting judge picks a black context card. Everyone else answers the context card with one of their white cards, trying to be as funny as possible. They pass their answers to the judge, who then reads each answer out loud and chooses a winner, finishing the round. I find it interesting that the players’ objective is to submit the funniest answer. Not the best one, the funniest one. This is subjective, of course, so there’s no predictable way to increase your odds of winning, and every person has different tastes. The game doesn’t specify anything else about how to choose the winner. Sometimes people listen to the group’s reactions, sometimes they only listen to themselves, and either approach is fine.

The main type of fun cultivated by this game is fellowship. The hilarity of the cards and responses leads to many instances of group laughter, which increases feelings of goodwill towards the other members and provides good memories. The game’s content veers directly towards taboo, bold, and offensive topics that you may not normally broach with your fellow players, so you get to know each other on a more intimate level.

The game works because it’s funny. Context and answer cards are written well and complement each other. People in general enjoy making others laugh, so playing gives them this enjoyment. The subjectivity of what’s funny combined with the luck of your cards means no one really feels that bad if they’re losing, keeping up the good spirits. Compared to Apples to Apples, it’s much more offensive and crass. This makes it worse to play in more formal contexts (office) and with strangers, but better to play with friends because it broaches more intimate topics. The game could be improved by revising cards that are confusing, not funny, or difficult to play.

Laughing at certain jokes can be a form of vulnerability. You may not want to laugh at something because it’s against your values – or you do. Whether or not you laugh at something can reveal a lot about yourself (there’s nowhere to hide), so I think the game forces people to be vulnerable in that way. Some cards also require certain knowledge about taboo or sexual topics, so throughout gameplay you can’t help but give off signals as to what you’re familiar with and not familiar with, which can be vulnerable information as well.