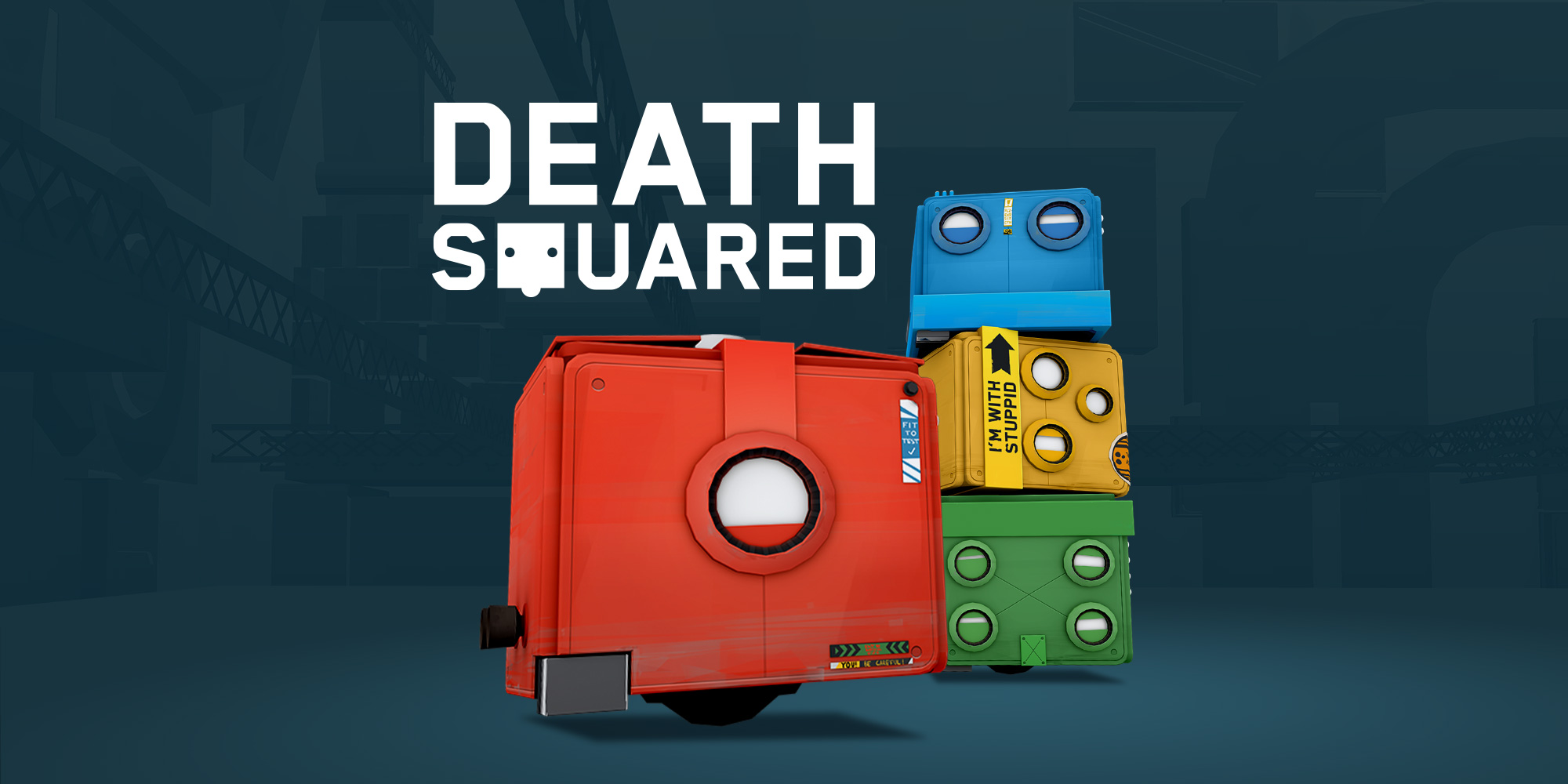 Death Squared is a puzzle video game designed by SMG Studio. There are many different game mode and number of player options; I played the Story mode with 2 players. The target audience is adults interested in cooperative light-hearted puzzles. I played on my Switch.

This is an embedded narrative game. The storyline follows the narrator, David, a programmer who is putting his test subject cubes up to a series of challenges. Each player takes on the role of one of the cubes and is only able to control their own cube. The objective at each level is for every player to reach their respective designated location, allowing players to move onto the next level. The boundaries of the game are the challenge course set up for each level; moving beyond the boundaries or falling off results in an immediate death and resetting of the course. The end state is to complete all the levels, showcasing the cube’s intelligence.

The core mechanics of the game are physically moving around the course, navigating obstacles (like spikes or lasers) and pushing buttons, and coordinating with their partner to get to the correct location. Moving onto different buttons can have varying effects (from moving blocks to activating lasers). Many of these obstacles can kill players, which forces a restart of the level. Thus, each death in the game is a loop. Players navigate across the course, learning what will kill them and change the course, and refining their actions for the next attempt.

One of the biggest successes of the game design is the ramped difficulty. The earlier levels are simple and fast, while levels quickly but reasonably introduce new obstacles and increase the complexity and coordination of partners. In the earlier levels, partners mostly only need to move around one another or push a button for their partner, but in later levels, partners must work together to move at the same pace and time to avoid lasers, coordinate button pushing and hiding from lasers, and even jump on and carry one another. This highlights the other major success of the game: forced timed coordination.

Players must plan and rely on each other to achieve success, resulting in players thinking for their own character but also for the other. Also, this causes the tension of the game: who needs to do what? Is it my fault or theirs? By ramping difficulty, the designer welcomes everyone into the game and gives players a sense of achievement, while playing into the storyline of a programmer learning just what the cubes can do (naturally, one would start easy and get harder). Then, the timed coordination causes the tension and fellowship of the game. It requires that players eventually come to the same (or similar) conclusion on how to get to the end, but they can explore many different routes and paths to get there.

The mechanics of the game allow for the game’s main types of fun: fellowship and discovery. Because the game requires coordination of multiple players to succeed, fellowship naturally arises. Players must work together, support, and depend on one another. The other main type of fun is discovery; each level allows players to enter a new map and find out what is going to happen. They are discovering the map, the answer to the puzzles, and even the basic question of: what will happen if I move to that square, push that button, or run into that laser?

During one of the earliest levels, we moved out of our starting point, spikes came up from the ground, and we immediately died. When the spikes popped up, we both audibly yelled! We were surprised, confused, and excited. But then, we had to figure out what caused it, naturally blaming one another since we both felt we hadn’t done anything to cause it. We had to each try out different movements to learn what caused it and why we died from it. This moment highlights the core interactions and fun of the game: discovery of a new mechanic, fellowship of blaming each other and then working together to solve a puzzle.

The branding of the game is futuristic, relying on tropes of robots and lasers, and bright clean colors that resonate with depictions of a computer-led future. The background of the game is a dark ominous gray, elucidating the challenge nature of the game and death that comes from falling into it. Even the core choice of using blocks reminds of a kid’s depiction of robots. However, the game keeps itself as light-hearted by offering fun color choices for blocks and silly customization to showcase that the game is not high stakes or stressful. Similarly, the voices throughout are reminiscent of something Siri-like, furthering bringing players into the computer world. Finally, the name Death Squared puts the game at the center of cooperative play (2 players!) and suggesting that it’s a game for adults (most kids games wouldn’t advertise the death aspect of the game).

As players move to later levels, there are no new mechanics introduced, only increasing difficulty and coordination of players. However, part of the initial delight of the game is learning how to interact with various different obstacles. Thus, one of the major improvements I would suggest is offering different types of obstacles in later levels or repurposing existing mechanics. One example of this would be an “opposites” level. Currently, some of the obstacles interact differently with each player depending on their color, so one option would be to have the players’ powers flip for one level. This would bring back the discovery of having to figure out what is going on without requiring an introduction of new obstacles.

Death Squared is a puzzle game that relies on coordination and cooperative play between players to create an aesthetic fellowship. Additionally, the game provides little instruction and requires players to discover how each level works on their own, encouraging fast learning loops. The game succeeds in creating interesting puzzles because of the cooperation between players, forcing each player to think not only for themselves but for each other.