For this critical play, I played the game Clash Royale, a real-time strategy card + tower defense game developed by Supercell. Normal play consists of two players each with decks of 8 cards, playing 3 minute games (with 1 minute overtime rounds) where they place their cards on the battlefield to try to attack the opposing player’s towers. Cards are paid for using elixir, which is continuously supplied to both players and can be spent at any time. The game’s accessible, fun artwork makes it appeal to a younger audience, but for those interested in more serious play, the game’s target audience is restricted to heavily strategy-minded players. 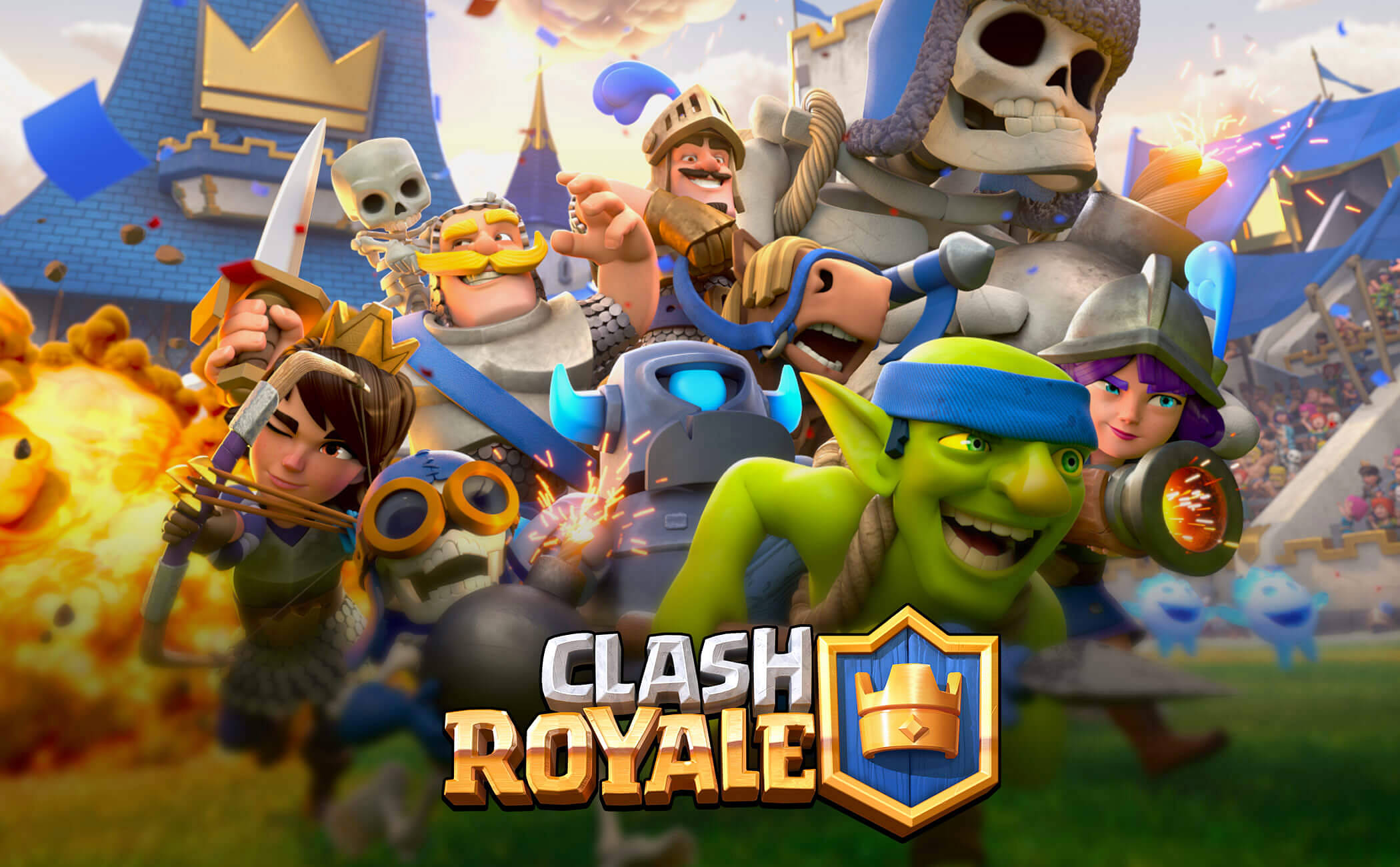 Clash Royale is an extremely balanced game, and it utilizes transitive balance, intransitive balance, and “fruitiness” to ensure that all of its cards are designed in a way that allows for fun, engaging play.Since cards can be played at any time, Clash Royale is a symmetric game –– neither player goes first, so all of the balance comes from either the gameplay mechanics or the cards themselves. In terms of game mechanics, both players have the same set of options at any point in the game (they can spend elixir to place a card in any legal spot on the battlefield), so the only imbalances in this regard are between inexperienced and experienced players. This means that the bulk of the balancing in the game comes from card design.

Clash Royale’s popularity and its format make it easy for the game to remain balanced –– any time an unbalanced card is discovered, its use will grow (or shrink) in popularity until the developers take notice and are able to fix the card’s stats and return the card to a balanced state. These kinds of fixes are usually reflective of one of the three types of game object balance, and I’ll highlight a few.

Transitive balance is made possible by the concept of elixir cost. If one card is weaker than another, the two can still be balanced by giving the weaker card a lower elixir cost. For one elixir, you can play the card ‘Skeletons’, which gives you four tiny skeletons. 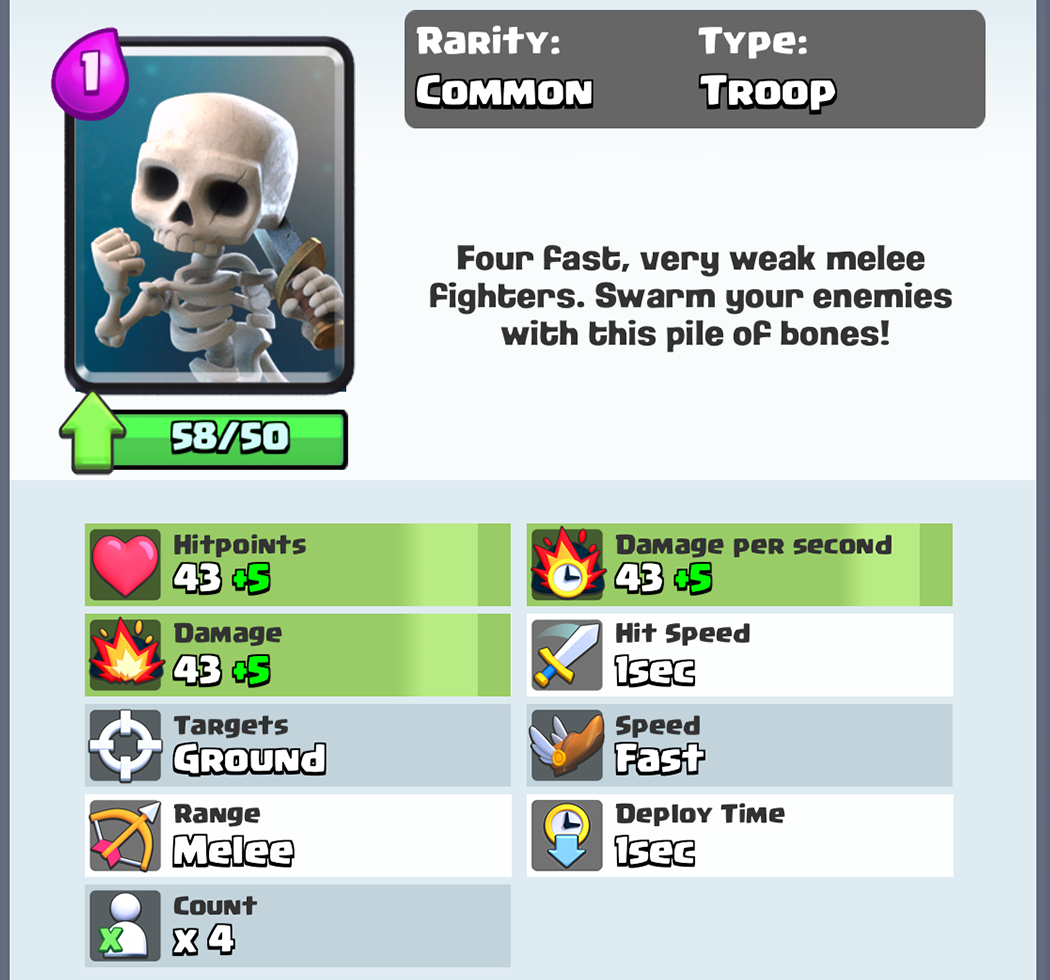 However, you can pay 4 elixir to play the card ‘Skeleton Army’, which gives you 20 of the same type of creature.

Intransitive balance is also possible because the concept of ‘counters’. For example, the skeleton army card mentioned before is brutal against single-damage cards like the Prince, since the prince must slowly fight each skeleton one by one. 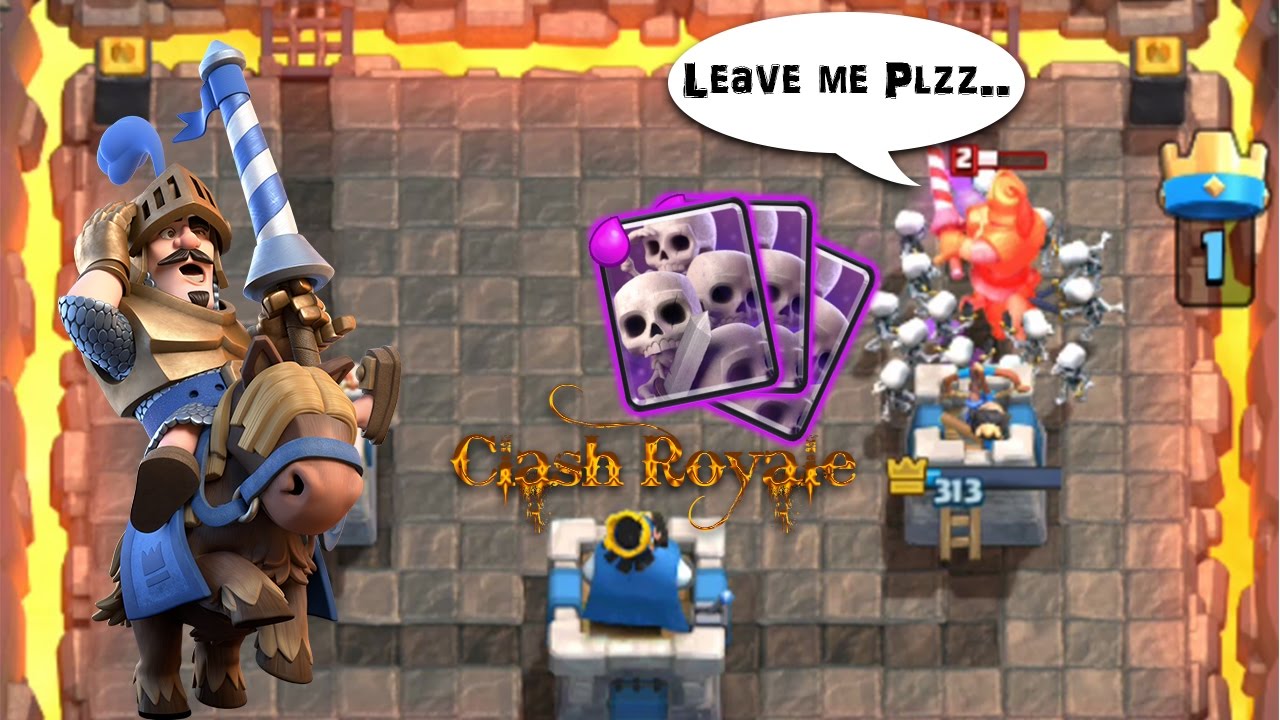 However, a splash-damage creature like the Baby Dragon is able to deal with skeletons easily, since it deals damage to many of them at once.

Lastly, the game is able to achieve ‘fruitiness’ because of the wide variety of card effects in the game. For example, look at the Ice Wizard and Electro Wizard cards. This first gif is the electro wizard: he shoots two lightning bolts which temporarily stun their respective targets.

This second gif is the ice wizard: he shoots one stream of ice which does splash damage and slows down a group of troops.

Without being an experienced player, it’s extremely hard to directly compare these two cards. Together, all three of these strategies allow for a game that is well-balanced, with many possible viable strategies that interact with one another in interesting ways.