Slay the Spire is a single-player roguelike video game developed by MegaCrit. It’s also the game that I’ve spent the most amount of time playing (at least according to Steam), and to this day I find it pretty crazy how replayable and engaging this game still is. 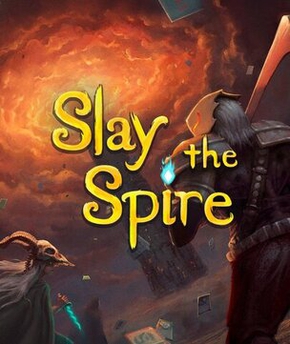 Formal elements in Slay the Spire

Players: Slay the Spire is a single-player game

Objectives: The objective of the game is to reach the end of the map by defeating monsters along the way; for those who are trying to hit achievements, it can also be considered a “race” to finish a “run” in the shortest amount of time.

End state: The player either wins by reaching the end of the map, or loses by running out of health along the way.

Procedures / rules: Players traverse a map and enter different rooms. Some of the rooms contain battles against monsters. These battles are turn-based, where players draw and play cards from their deck; playing cards cost a certain amount of energy, which is then replenished at the beginning of each turn. Throughout the game (after defeating monsters, and in various rooms), players have the opportunity to select cards to add to their deck and receive various power ups and potions that can strengthen their abilities and inform their gameplay strategy.

Magic circle: Generally the screen that the game is played on!


Balance in Slay the Spire

Here, I break down how Slay the Spire interacts with (most of the) four kinds of balance, which greatly contributes to it’s replayability, and how it’s been able to be delightfully challenging despite having played it so many times! I would also go into the Three Ways to Balance Game Objects, but this is already so long :\

For the first, each run consists of three levels, with the monsters in each level increasing in difficulty. This addresses the player’s improvement in strategy throughout the game; in the beginning of the game, the player has the starter deck which is inherently pretty weak; by the next levels, players are expected to have a more refined deck and strategy to be able to defeat more difficult monsters.

This doesn’t really apply to Slay the Spire as it’s a single-player game.

Balance between Strategies of the Game

Slay the Spire is filled with many choices, each one drastically changing how one might play the game, and ultimately determine the player’s strategy in the game. Some example strategies that I’ve encountered or tried in the past include building a large deck of cards, maintaining a small deck that can be cycled through quickly, and relying less on cards and more on power-ups and potions (just to name a few!)

Because of the sheer number of strategies, it’s hard to determine whether there is one dominant strategy; additionally, each strategy (that I am aware of, at least) has some weakness against some monsters, and are more beneficial against others. Since players cannot anticipate the monsters they encounter (except for the boss at the end), they can only hope that the strategy they have selected will work well.

There are many objects, as well as places where the player must choose between two of the same type of objects, throughout the game. Here are some of them:

Selecting cards when building your deck

After each defeating a monster, players get the option to pick a card out of three options to add to their deck. There have been multiple instances where I search unfamiliar cards online to see if they are worth picking up; however, I noticed that for each card, there is rarely a concrete “yes, you should pick this card” — cards alone are never enough to be good, and oftentimes other aspects of the player’s strategy can make the card useful, or detrimental.

For example, a player that has a higher number of energy at the beginning of each turn in battles, selecting a card that requires more energy but does more damage may be beneficial for their strategy; for another strategy, however, that card may be unfeasible to play and may clog up their deck, essentially becoming a useless card when drawn during battle.

Because of all the moving parts and randomness in the game, no one card is objectively better than the others; the “balance” between cards really depends on the existing game and deck the player has so far.

Cards to play when battling a monster

The balance between cards and their cost (the amount of energy needed to play) and their effect (what the card does) is one of the main bits of balance / decision making in the game; players will spend time thinking about which cards and which order should they spend their energy on, given the monster’s anticipated next attack, as well as additional power ups and effects that may occur. Much of the spirit of this game is trying to figure out what set of cards is the most optimal!

Slay the Spire is really a game of strategies built from decision-making, but the various levels of balance built into this game has made it an incredibly replayable game that has had me happily sink in 100s of hours into the game (and after writing this, I think I’ll go spend a couple more hours on it again!)