Baba is You is a single-player puzzle video game created by Arvi Teikari. The game is composed of various levels, each level being its own puzzle. The objective of each level is to solve the puzzle given the rules defined in the level’s space.

Rules in each puzzle are defined by word-blocks in the space, which are either an object-type in the game (For example “Baba”, the main character; “Rock”, “Tree”, “Wall”), the word “is”, or a property/action (“Push”, “Hot”, “Stop”, “You” to name a few). Align three word blocks (one of each type) together horizontally or vertically and you get a rule. For example, “Rock is Push”, “Wall is Stop”, or “Baba is You”. These determine the constraints of the puzzles, as well as how the player can interact with objects in the game. 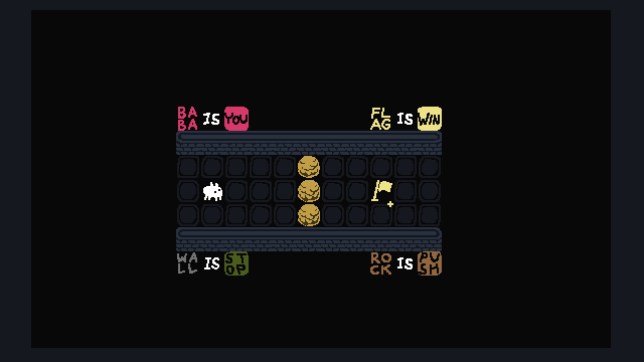 In this image, the rules of the game are “Baba is You” (You control Baba, the small sheep), “Flag is Win” (You solve the puzzle by reaching the flag), “Wall is Stop” (Wall elements on the screen act as blockers that you cannot move through or over), and “Rock is Push” (Rock elements can be pushed by Baba).

The most interesting part of Baba is You is the meta nature of the puzzle solving, where to solve the puzzle, players need to manipulate the rule sets. Word blocks can be pushed around by the player to break and create new rules that are often essential to solve the puzzle.

Here, Baba moves around word blocks to change the phrase “Baba is You” into “Rock is You”, allowing the player to move around as the Rock instead of Baba.

By moving around objects and word-blocks in the game, the player is able to create new rules that affect the environment, allowing them to reach the objective in each level.

This is an example of one of the beginning levels, where we manipulate the “Wall is Stop” rule so we can access the flag, which is the win state for the level. As the game increases in difficulty, levels introduce new word blocks, elements, and require more complex rule-building to solve.

This game’s fun lies in the challenge aspect of the puzzle, where the player must think about how to solve the puzzle by manipulating the environment and word blocks.

I really enjoy this game for it’s unique meta-ness where part of the puzzle is defining your own constraints; the puzzle designer has also found really great ways of making some rules unbreakable (for example, by placing them in the corners of the screen, so players cannot access the other side to “push” them and break the alignment of the word blocks). The game also has a really great visual design that is pretty cute, cohesive, and approachable.

One improvement I would suggest for this game is to maybe incorporate hints for some of the harder levels; I found myself searching for guides online after being stuck on levels for a while.