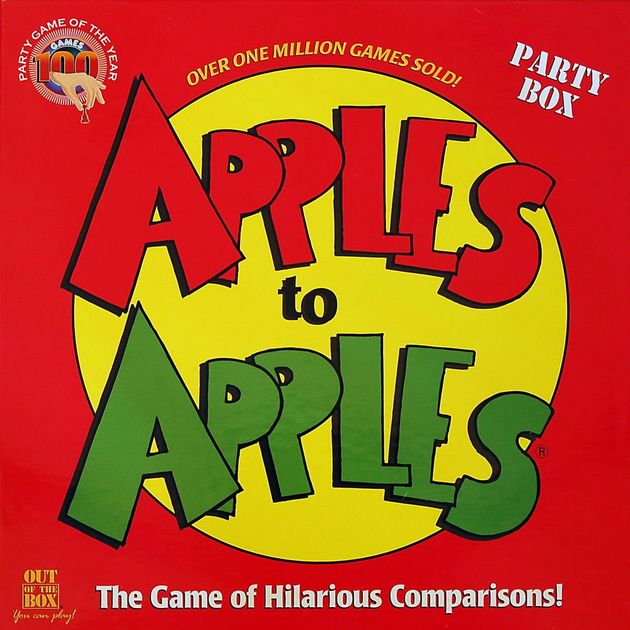 Apples to Apples is a physical card game designed by Matt Kirby. The target audience is broad as it is a party game, but the marketing and color choices appeal to casual, social gamers and families

The rules and procedure of the game are quite simple. Each round, a new player becomes the Judge and reveals a category card. Then, all other players anonymously submit a card in their hand that they feel best fits the category. The Judge then chooses their favorite card, and the player who submitted it gets the category card. The objective is to be the first player to get 7 category cards and that player is deemed the winner.

Thus, the main mechanics of the game are revealing the category, submitting the best fits, reading all the best fit cards, and choosing a winner. Each round of the game is one loop, where players can learn what types of cards different Judges like and hope to improve on their submissions in the future.

Additionally, taking turns being a Judge also offers a nice twist in the pace of the game. As a judge, everyone has different styles of cards they prefer. One person might prefer funny cards while another might prefer exacting definitions. This requires players to try to submit cards differently in each round. By having players take turns being the judge, it not only allows for everyone to have fun being the one in charge, but it also allows players to have to gear their selection differently in each round.

The simple mechanics of the game allow for the game’s core type of fun: fellowship. Because the game is centered around interactions between players, the intended type of fun is fellowship. In order to win, a player must be chosen by other players (when they are the Judge) many times, emphasizing the reliance on fellow players; the core loop of the game requires fellowship, and the more one player understands the other players, the higher their likelihood of winning. Because fellowship is a necessity to win and the mechanics requiring a Judge to choose among the players every found, fellowship comes up naturally in the game and becomes fun. 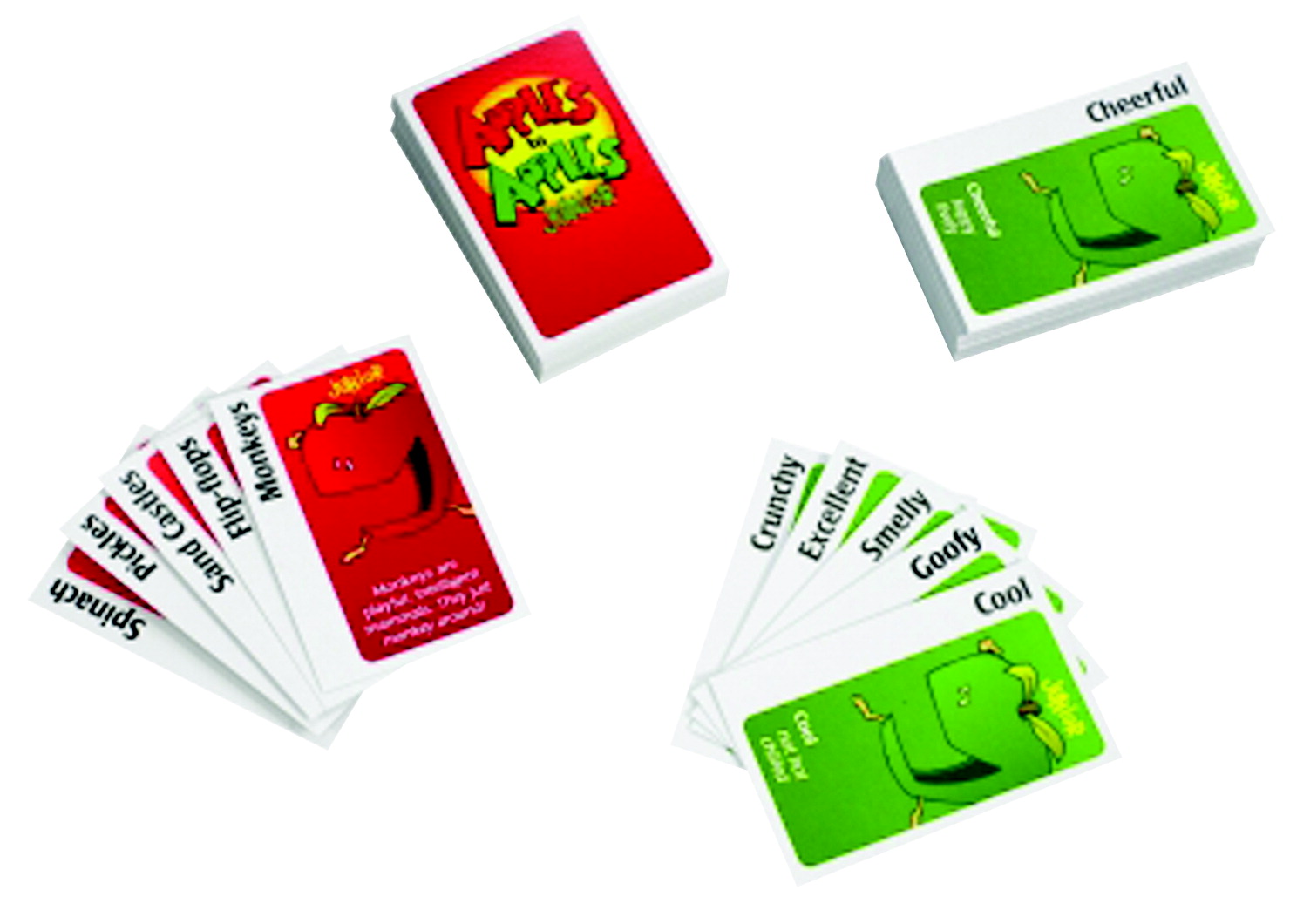 The game became especially funny and entertaining when our group didn’t have many cards that suited the category well. We had to be creative or simply throw in a random card.

The surprise and hilarity of revealing the cards anonymously is the true secret to success in the game. Because all players submit their card anonymously and the Judge reads them one by one, it almost becomes a show. Watching the Judge react to the card you submitted is entertaining as well; did your joke come across? Did it seem like a good fit? The mechanics of this game come together to create the dynamics of a shocking reveal leading up to the crux of the conflict in each round: who wins the card?

The branding of the game is lighthearted. The choice of theming around the common phrase of comparing apples to apples is brilliant and clever; it’s fun and relatable to the target audience. Parents will remember the phrase, and the apple cartoon graphics appeal to children. The branding is bright and exciting with sharp reds and greens, mimicking its appeal as a party game. Finally, the font is thick and silly, highlighting its role as a family friendly game.

The only major criticism of the game that I have is that the rounds gets quite repetitive; there is only one loop to the game and it never changes. There are no surprises in the structure of the game, only in what players submit or Judges select. To further change the pace of the game and alleviate the repetitiveness, I would suggest including new (and rare) action cards that require players to change their hands. Some possible examples: pick up a whole new hand from the draw pile, switch cards with the player to your left, randomly pick 2 cards from another player). This would keep the main loop of the game but offer a new surprise mechanic to differentiate play and pace.

Apples to Apples is a game with extremely simple mechanics, but the designers cleverly chose anonymous submission of cards to create a suspenseful, surprising, and entertaining reveal in every round. Additionally, having every player take turns acting as the Judge offers variety to the rounds and allows different players the opportunity to be in charge and share their personality. Because every round is a different judge with a different category, the game never gets boring. We ended up playing three different full rounds of the game because we liked it so much, laughing the entire time.