Magic: The Gathering is a card game that actually gets mentioned in the Extra Credits video for this week. One of the foundational mechanics of the game is the idea of mana, the in-game resource that determines which cards can be played and when. While mana is one of the fundamental pieces of Magic’s gameplay, it can also be one of the most complex. In fact, the entire concept of how mana works within Magic can be very confusing for new players.

In broad terms, mana is a resource that is created when you ‘tap’ (turn sideways) a land card. There are many variations of land cards, but the most basic ones are aptly called basic lands. There are five of these, one for each of the five colors in Magic: mountains (red), forests (green), plains (white), swamps (black), and islands (blue). When you tap a land you get a specific color of mana. For example, tapping an island will give you one blue mana. This ‘mana’ isn’t tangible, but is kept track of by the player. It is spent to play spells, each of which has a mana cost.

There are many more rules and specifics that apply to mana in Magic: The Gathering, but these are the basics of how the mechanic works. While the concept may seem straightforward, the mechanic of generating mana may be the most impactful single mechanic that I have ever used. It’s hard to single out a specific dynamic facilitated by mana generation, simply because the entire game is built off of this idea. Without the idea of mana costs, Magic would not exist. However, I can point out a few of the ways that it shapes gameplay for Magic: The Gathering.

The first is that it transforms Magic from a brawl-y game into a game about resource allocation. This is a broad statement, but I’ll try to clarify what I mean with an example. In a game of Magic, each player has 20 life points, and the most common way to win is to reduce your opponent’s life points to 0. Usually, damage to a player’s life points is done with creatures, cards with a power and toughness that can attack the other player. 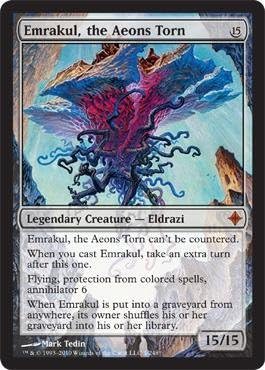 This is an example of a creature card. It has a whopping 15 power and 15 toughness, meaning that it could almost wipe out the opponent with a single attack. At first glance, it seems that this should be one of the most powerful cards in the game –– the goal is to get the opponent to 0 life, and this card can do that very quickly. Now look at a different card. (Sorry for the size discrepancy). This card is much less exciting than the first. All it does is add three mana to the mana pool, which is the equivalent of tapping three different basic land cards. That being said, if you wanted to buy this card right now it would cost you around $26,000. The gigantic creature card above it would only cost you around 30 bucks.

Magic is about resource allocation. I’m already past the word count max for this post, but to sum it up, mana made me rethink the way I play games, and it opened up a portal in card games that turned traditional fighting games into a resource-focused strategy game where all sorts of different strategies and combos can work to exploit the system of mana costs and take each other down in a variety of ways.