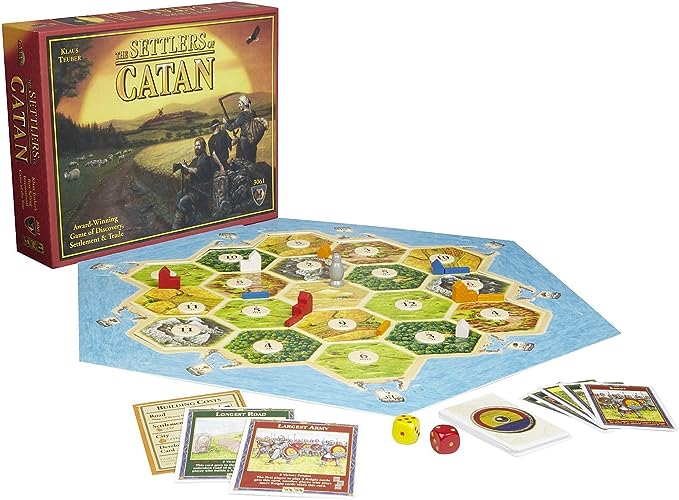 Settlers of Catan also has several potential winning paths to victory, with them largely balanced. For example, when my friends and I play Catan, some players will try to acquire large sums of certain resource cards and use ports to trade them for resource cards which they do not have. Other players will try to claim an even amount of all resource cards. Still others will acquire large sums of certain resource cards but, rather than attempt to claim ports, will trade with other players to acquire needed cards. And these are just several paths to acquiring resource cards themselves — many more paths are possible for achieving victory. Some players try to build the longest road, while others try to buy a lot of development cards in the hope of getting the most knight cards and drawing victory point development cards. Some players try to build a large number of settlements whereas others try to build only a couple settlements but upgrade these to cities. In total, there are numerous combinations of paths for acquiring resource cards and paths for spending these resource cards to claim victory. When I play with friends, the strategies we each use shift constantly — we might start with one strategy depending on our initial starting positions but change strategies throughout the game in response to other players’ actions. This ability to shift between different strategies to win points to a well-crafted balance between the different strategies — no one strategy is clearly dominant over the others.

Finally, Settlers of Catan is well balanced with regard to game objects. The resource cards themselves are very balanced — depending on the initial starting position, certain resource cards may be more valuable but this directly reflects how scarce they are. Furthermore, development cards are balanced against building settlements and cities — the player may choose to buy development cards to win or to build settlements and cities to win, and in my experience each strategy has a fair shot at winning. Finally, the competitive nature of the game itself self-corrects any imbalance which may arise during the game. The game encourages players to take down players who monopolize a certain resource, thus inflating its value relative to other resources. If one player monopolizes a certain resource, other players can use combative development cards or move a special robber token in order to steal resources from that player. The transparency of Catan further incentivizes players to team up to take down monopolizing players — players see the entire game board at all times and can see if one player begins to monopolize a resource. Since this is detrimental to all other players, the other players are incentivized to work together to defeat the monopolizer. Thus, the social aspect of Catan itself dynamically corrects any imbalance which emerges between game objects as a result of play.

The purchases of development cards and settlements / cities is balanced through a well-crafted transitive relationship — the resources required to purchase each of these items are well proportioned to how valuable each of these items are. The selection of which items to buy during game play is governed through an intransitive relationship — development cards may be effective against an opponent with a large number of cities close to each other, a large number of spread out settlements may be effective against a player who is stockpiling development cards, and so on. Catan does not exhibit the third type of game object relationship — the fruity relationship — as one of Catan’s core draws is that everything can be traded against each other and thus can be compared / has numerical value.

In conclusion, I found Catan to be very well-balanced in all regards. I enjoy playing Catan with friends all the time — I think this balance and the creativity in strategy it inspires is one of the core reasons Catan is so loved by my friend group!