For my game, I played The Almost Gone, a PC game developed in 2020 by Happy Volcano. Despite its minimalist and beautiful artwork, the game covers very serious and sensitive themes, thus targeting it at an audience of college students and older. The game begins with the main character alone in their room — apparently nobody else is home. As the player solves small puzzles and makes their way out of their house, the player slowly learns what happened to their family. Over the course of five interactive levels, the player explores different locations connected to their family and learns the deep, emotional secrets  their family carries as well as what happened to them.

The game is a narrative-driven puzzle experience — the player explores different game spaces and interacts with different objects in order to progress the narrative forwards. The game’s mechanics consist of clicking on tiles in order to move the player, rotating game spaces to view different parts of them, clicking on objects in order to unlock dialogue or puzzles, and clicking on different parts of puzzles in order to solve them. Each puzzle was a little different and they all tied closely into the narrative. One puzzle had me sorting through the father’s childhood items in order to understand his childhood story, and another puzzle had me connecting different neighbors with their houses based on their household objects in order to understand what happened to them. This led to a smooth experience that didn’t disrupt the flow of the game. And not only was it not disruptive — it also helped the emotional experience of the game significantly. Since the puzzles rely on human interaction, I was able to take as long as I like between game spaces, between puzzles, and even during puzzles — this let me process the emotional content of the game at my own pace. 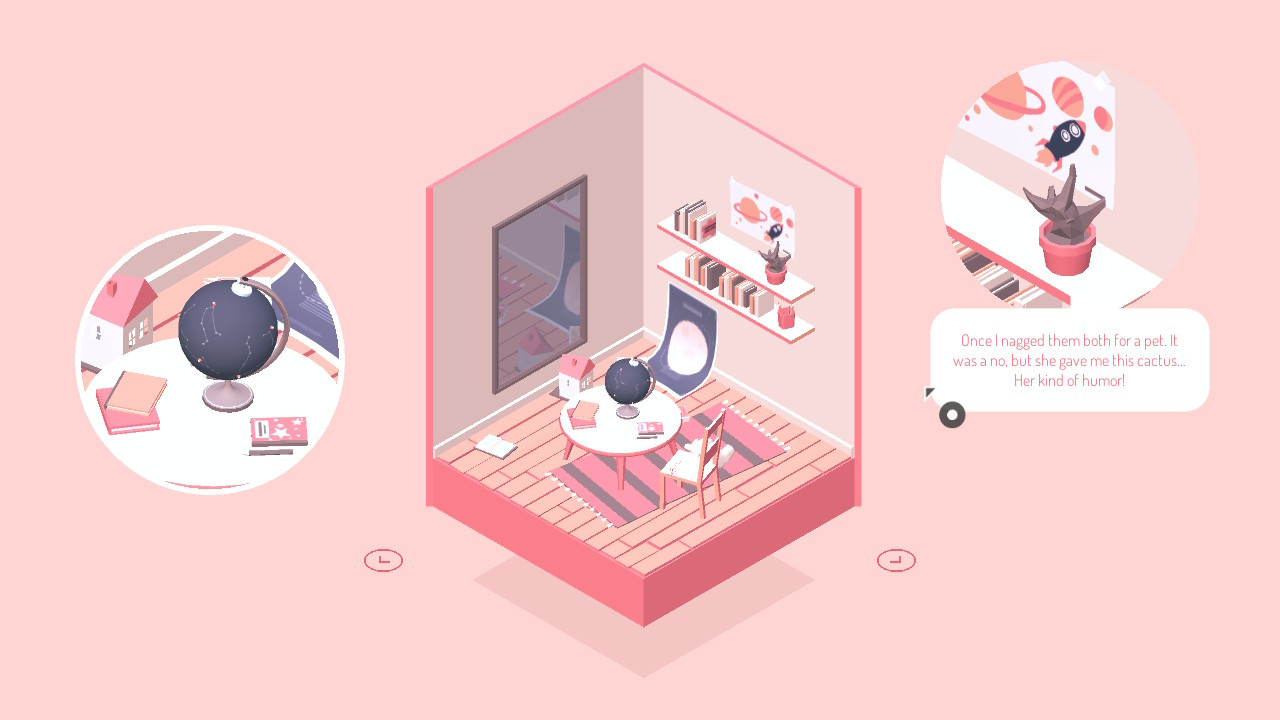 The game conveys its fun through Narrative and Discovery. As a narrative-driven puzzle experience, much of the game’s fun revolves around exploring the different game spaces and learning about the player’s family through interacting with the objects within the game spaces. The game succeeds in this through an emotional narrative — heavy topics are discussed and the history of the player’s family is slowly revealed as the player progresses through the game — there is good buildup of tension which keeps the story from becoming stale. The game is particularly strong in using aesthetics to impart emotion and narrative — the color of different game spaces subtly indicates how the player is feeling, the border of the game itself fades in and out as the player makes realizations, and the design of different game spaces subtly shifts between feeling cluttered to minimalist as the player’s emotional state shifts between chaotic thoughts and calm understanding.

While the narrative is extremely successful in imparting emotion — I had to sit back and process the story’s intense emotions for half an hour after playing — it becomes a little too subtle at times. The conclusion, in particular, left me feeling a little unsatisfied because I was left with unanswered questions about key elements of the story. I was a bit taken aback by how abruptly the game ended — I thought there would be more clarity about what transpired — and I ended up browsing online discussions of the game in order to try to find answers to my unanswered questions. I found it wasn’t just me who was confused by a couple of elements — there was no consensus online about what exactly had transpired at a couple of key points. A little less subtlety about some of the key narrative elements would have gone a long way to making me and other players feel satisfied with our understanding of the narrative. Perhaps additional dialogue could have been added when interacting with different relevant objects to provide insight into these confusing plot points.