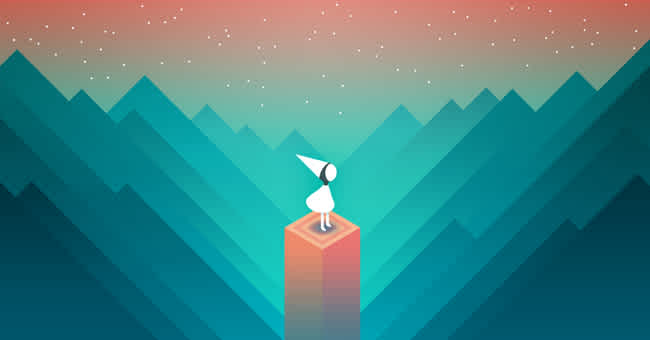 Created by UsTwo Games, sold on the app store.

The target audience of Monument Valley is really anyone, though the puzzles require a bit more thought and critical thinking. Though the game is listed as 4+ on the app store, I would assume that it would be harder for younger players because some of the gameplay is surprising and not immediately intuitive. However, the game has a nice onboarding period that allows users to get used to the controls.

The game is single player. The procedure and rules grow and change throughout the gameplay, but a basic breakdown is as follows: 1) for the procedure, the player moves Ida through a given level and attempts to get her through a door or a series of doors that are unlocked by puzzles and 2) for the rules, Ida must move along the isometric paths and is constrained by the landscape. The game has an underlying objective of restoring the sacred geometry, but the more pressing objective for the player is just to get through the level. The game doesn’t introduce many conflicts through opponents (though one could argue the crows make formidable foes), the conflict is mostly just the obstacle of the landscape.

In terms of fun I think that this game touches upon:

I think this game is particularly successful in that the player is continually kept in a state of learning, while also feeling accomplishment. The puzzles in Monument Valley build narratively in a vague sense, but the real fun is that almost every level adds in another feature/mechanic of how the puzzles can be solved. For example, you unlock things like turning the puzzle around or using game pieces as pseudo elevators. Every time you go to solve a puzzle you can use what you have learned in the past, but you also are invited to learn the new piece of information in order to solve. This keeps the user engaged in the new levels and excited by even small changes in the UI that might indicate a new way to play the game.

My only improvement to this game would be including a little more information about the background plot and also adding more levels. I want to be able to play this game forever. The excitement of getting through the puzzles for the first time makes you want to speed through, and I got to the end before I was emotionally ready for the journey to be over.