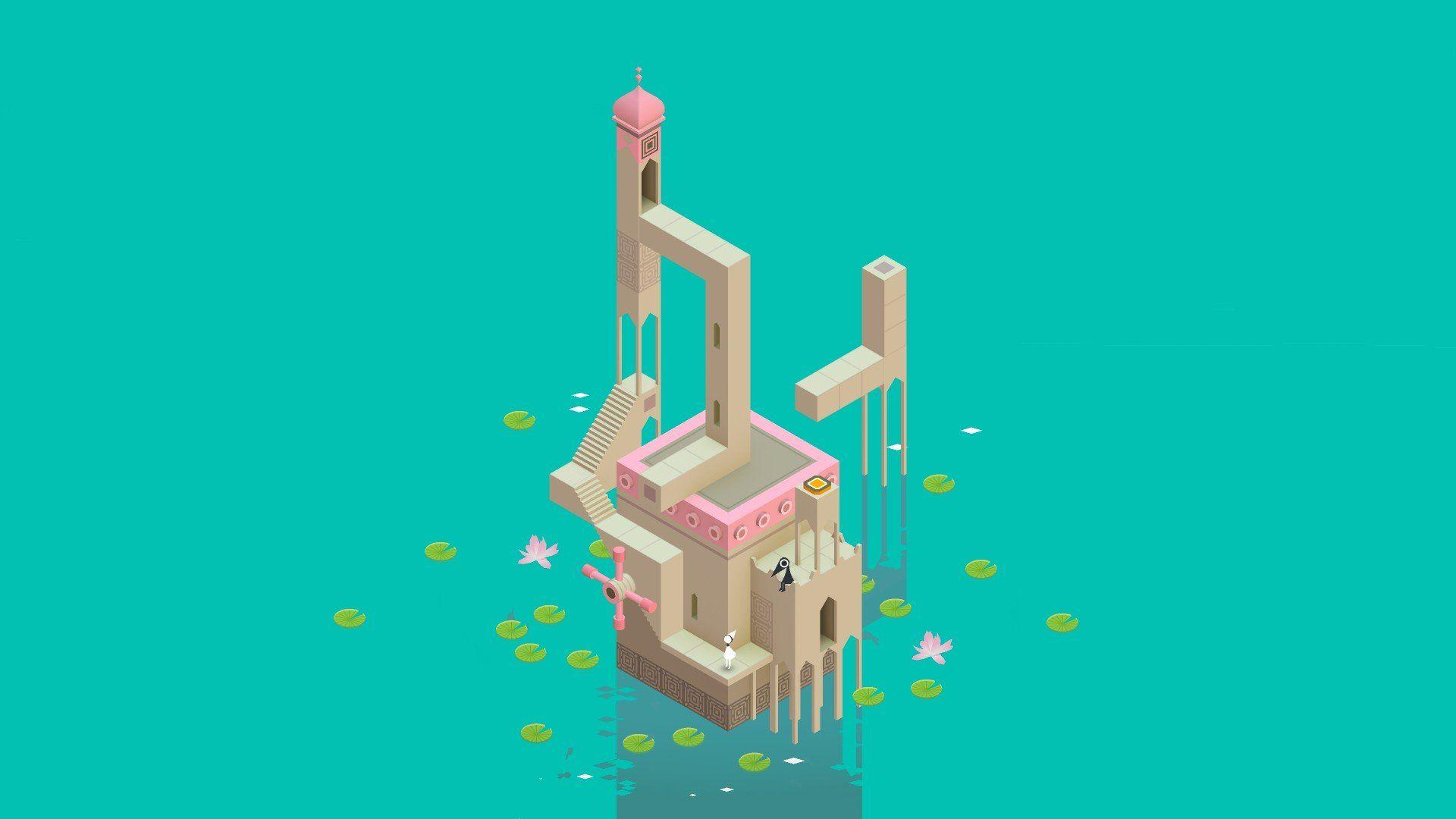 This week, for my puzzle critical play, I played Monument Valley, developed by Ustwo Games on an Android platform. While the game is recommended for ages 8+, I believe the game has simple enough controls to be played by younger children, albeit at a slower pace. The game is intended to be played by a single player.

Ida can defy physics and walk on walls!

To play the game, players are able to move different components in the simple central structure, such as rotating or shifting components. The goal is to clear a path for Ida, the game’s protagonist, to reach the finish line. Once a scene is cleared, the player can progress to the next part of the structure, or complete the level to move to another structure.

Between these two frames, one puzzle component has moved, but multiple parts of the puzzle change

The game is very unique in both its artworks and mechanics, which are tied together very closely. Although the structures presented are small, they are designed very carefully to manipulate space and perspective. Common rules, like physics, are disregarded in some parts of the game, forcing players to see each structure from different angles and perspective. The game also heavily relies on optical illusions to connect paths, which can be unintuitive at first and require a unique perspective. For example, some levels incorporate the Penrose stairs, or the infinite staircase, and require the rotation of a portion of the structure to move the player around. Such design allows for creative movement and requires unique problem solving skills, setting the game apart from all other games in the genre. Because of the leveling system and the complex puzzle design, the game primarily appeals to players who enjoy challenge. The game also, however, has a narrative between levels, with the protagonist Ida interacting with other characters. The story unfolds itself as the player progresses through the challenges, giving the game a secondary focus of narrative.

Example of narrative in the game: Ida talks to another character

The game was very fun for me, mostly because of how innovative the puzzles were. They were not standardized in any way, unlike some other puzzle games I have played, where similar patterns emerge as players play the game more. Each puzzle felt unique in its problem solving, and the different types of optical illusions and special rules that they introduced made the game exciting and different, preventing burnout for me as a player. The game was also very beautiful in its simplicity, which made the game more peaceful and enjoyable. 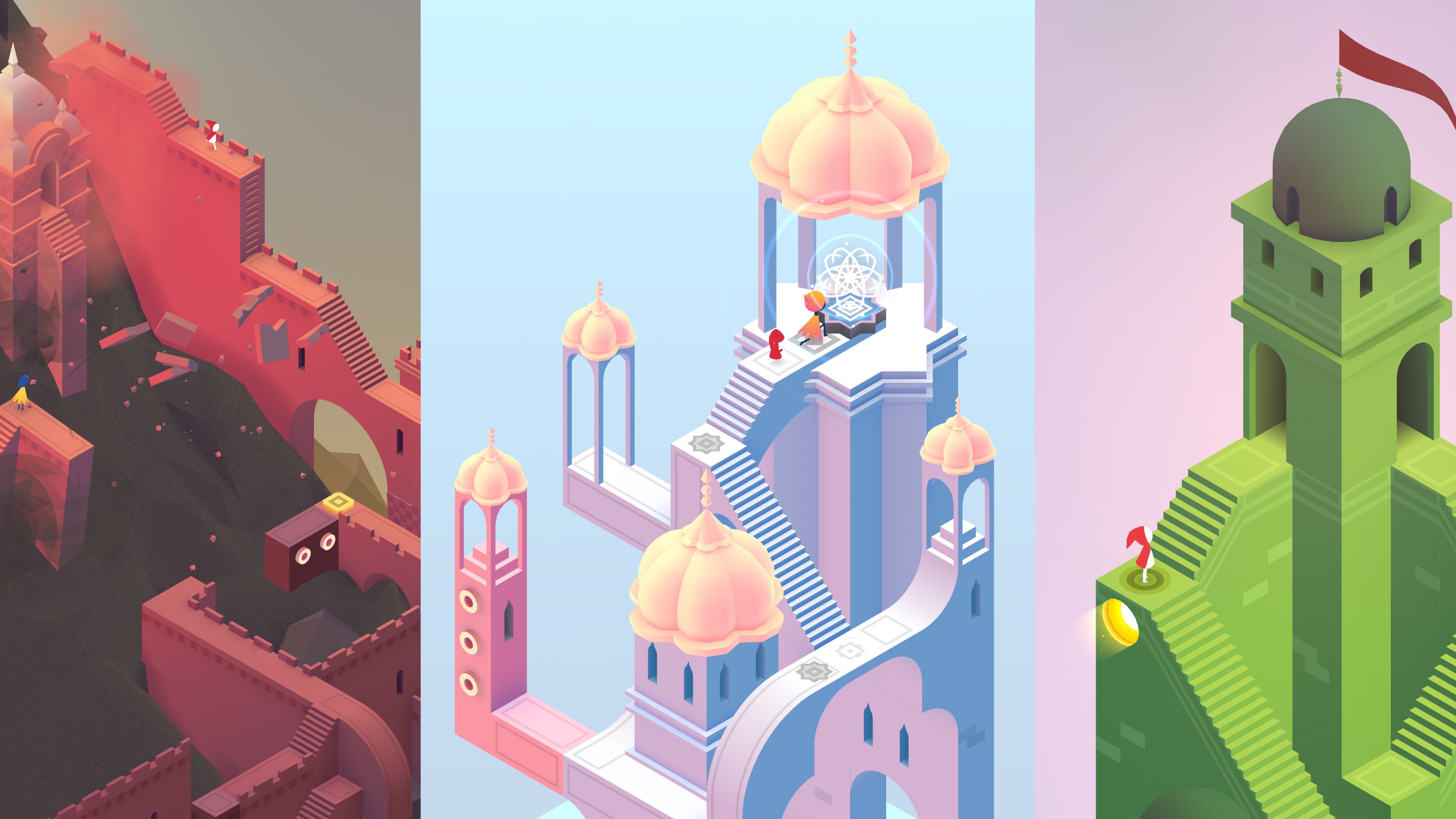 For the most part, the game was an overwhelming success. Between the creative levels, I felt like the game never got old, but solving each puzzle gave me notable feelings of success and accomplishment. The levels in the beginning were quick to solve because of their one dimensionality, but they introduced important rules needed for future levels, which made sense. There was one moment of failure for me personally, however; I got stuck on one of the puzzles, and didn’t have any kind of hint system to help me solve the puzzle, so I wasn’t able to progress for a long time. Thus, if I could change the game in any way, I would recommend introducing a small hinting system that players can opt into in case any part of the game becomes confusing or challenging. Overall, however, I very much enjoyed Monument Valley!