Game: Star Fluxx. Fluxx (of which Star Fluxx is a variation) was created by Andrew Looney and published by Looney Laboratory, Inc. as a card game.

Target Audience: Ages 10+ as the game takes a bit of patience to read the cards but is still pretty accessible to pre-teens and teens. The theming makes it especially fun for sci-fi fans since there are lots of Easter Eggs and references.

Important Formal Elements of the game: This is a multi-player game for 2-6 players, and in my experience, I found it most fun with 4-5 players, because there would be more opportunities to form alliances or hinder other players. This card game is unique in that the “goal” (or winning cards) changes throughout the game. From Wikipedia, the basic mechanics and types of cards are: “Keepers, Goals, Actions, and New Rules. While the game begins by requiring players to simply draw and play a specific number of cards, the mechanic mutates when a New Rule card is played. The card may change the number of cards drawn or played per turn, the number of cards held per hand, or the Keepers played. The Goal cards change the Keepers needed to win the game.” 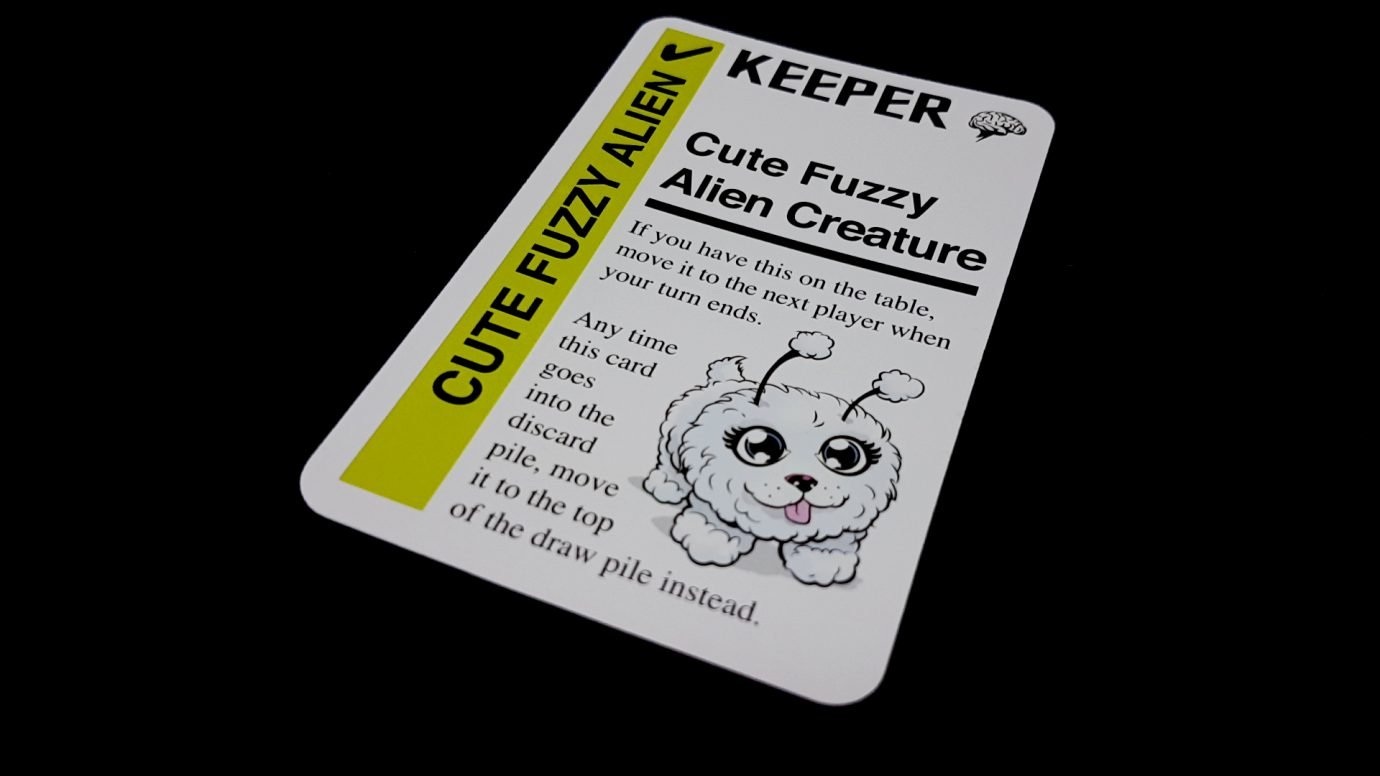 Game Balance and moments of particular success: The second and fourth types of game balance were very relevant to Space Fluxx. Since there are few repeated cards in the game, each player is almost guaranteed to start with different cards which are asymmetrical, which means that at that point some players are more likely to win than others. However, the constantly shifting objective of the game mitigates that. Also, there are also few cards (except a few Action Cards) which are more valuable on their own — everything is in relation to the Goal card in play and to other players’ cards. This leads to the fourth type of balance, the cost/benefit ration, also being constantly in flux (hence the name!). So even though some cards are very valuable or very useless at a given time, each card within its category is of the same value as any other card within that category. As an example, the most divisive card among my friends and I is the Cute Fuzzy Alien Creature Keeper card (or, as we call it, Lord Fuzzy). Once played, it’s impossible to get rid of: it follows the player whose turn it is rather than the player who played it, and goes back to the draw pile if anyone tries to discard it, and it does absolutely nothing unless one specific goal card is played. So it’s very not valuable most of the time and yet could make you very lucky on your turn, which makes it both balanced and unbalanced.

Type of fun game intended: Fellowship and challenge. This game is meant to be played with a group of other people, and allows for lots of opportunities to help/hinder your fellow players, making the group dynamic come to the forefront. It’s also a challenge, since the goals and rules and thus strategies are constantly shifting.

Things you would change to make the game better: One big issue with the game is that it takes a while to learn it, since every card is different and filled with lots of text. The first round of the game took a long time to play, and honestly felt like a lot of reading. A potential fix would be to re-do the text to only give the key information (making it as clear/succint as possible), and also re-design the Action and Rule card graphics to be more informative than they currently are.