I played Dear Esther, a single-player, first-person exploration and adventure video game developed by The Chinese Room. It is available on Microsoft Windows, Mac OS X, PlayStation 4, and Xbox One. The game is $9.99 on steam but it was free-to-play when it was first released in 2008 until its redevelopment for its commercial release in 2012.

What I found most interesting is that the game does not have challenges, puzzles which are game mechanics I am used to seeing. To me, Dear Esther is special because it is able to engage the player while having minimal game mechanics. In fact, the ability the player has is to walk. Exploring these games gave me a different insight into game design and its flexibility.

The game is presented through a combination of voice-overs and letter fragments read by a male narrator to Esther. Specific locations the player goes to trigger these voice-overs. The storyline takes place after a car accident that took Esther’s life. The narrator reflects on her death and their time together. This story set up reminds me of Old Man’s Journey that I played in section which was about the Old man exploring his memories with his wife that passed away by revisiting places they had been.

The storyline is mysterious because it leaves a lot of room for interpretation. The player gains information about the man as they explore different portions of the islands. We also learn about other characters that inhabited the island. However, the messages can be very extravagant, poetic, obscure, and tricky to interpret or piece together. After playing the game a few times I notice the voice-over triggered changes this adds even more ambiguity to the storyline and allows the game to be replayable as the outcome is different every time. I also think the locations have underlying meanings. My favorite location was this blue cave with red and orange pillars, the blue shadow’s outline is kinda shaped like a heart making me think the cave is symbolic of the narrator’s heart. 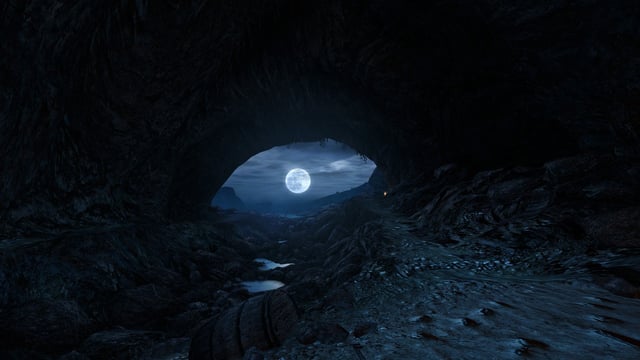 Another symbolism I can spot is the exit of the cave, which is shaped like an eye. To me brings together the idea of caves as an internal journey through the body symbolizing rebirth.

I believe that the game’s enjoyment stems from the exploration of the game’s rich setting. The graphics in the game are breathtaking. The rustling of the grass, the movement of the clouds, and the etch on the rocks are all meticulously detailed. This produces a compelling and immersive environment. What the game goes an amazing job on is rather than telling the players how they are supposed to feel, the game uses the environment and physically places them within that emotional state and represents it around them.

In addition, finding out the narrative can be fun and compelling for some. This is definitely a game for those looking for a low-stakes relaxing game and not for someone who is looking for competition and puzzles.