Her Story by Sam Barlow is a mystery video game where the player pieces together various video clips in a database. In the video clips, (seemingly) one woman gets interviewed multiple times about the murder of Simon, her husband. Given the dark / mature themes mentioned in the story (death, sex, affairs, etc), this game is intended for adult audiences. 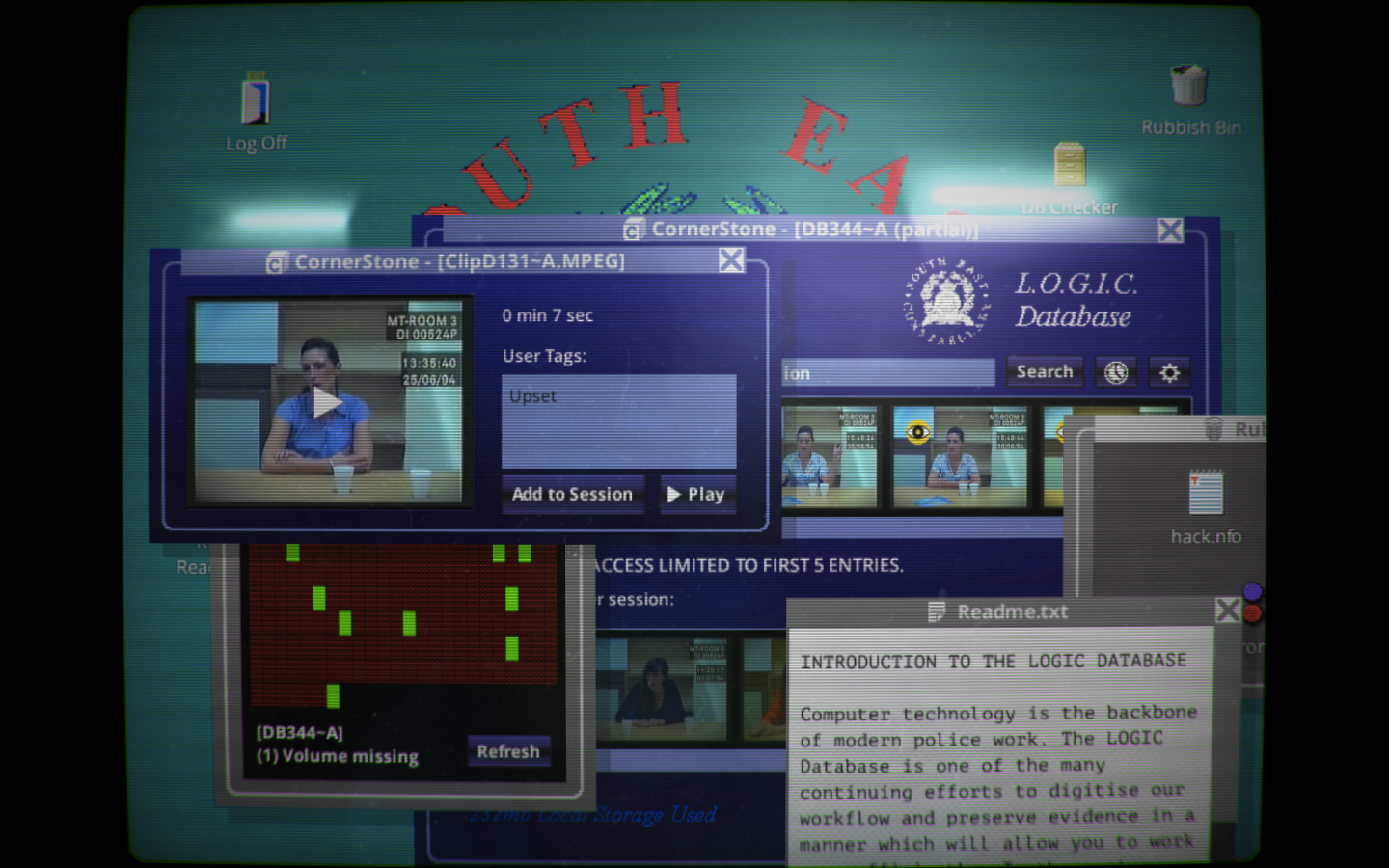 Players: Her Story is a single player game, although when I played it I watched clips with my partner, which made it fun to discuss possible theories as the mystery unraveled.

Objectives: The objective of this game is to discover the truth behind Simon’s death, as well as corollary stories about the main interviewee.

Outcomes: According to spoilers, at the “end” of the game (once you have watched a certain threshold of clips), a chat bot reveals your players identity. This game is definitely more of a story-based game, and does not really have a “losing” state — it generally continues until the player feels like they have a grasp at the mystery

Procedures / rules: The player watches short video clips (normally under a minute, although a few are slightly over) of various interviews. Players access video clips by searching keywords in the database interface; each query returns a maximum of five video clips that contain the query in the interviewer’s response.

Boundaries: This game lives in my mind rent-free! While the game itself is constraint to the screen, I found myself looking up theories that users had written up online afterwards, as well as discussing them with my partner.

Types of fun: I would say the main types of fun Her Story explored are narrative and discovery. Much of the thrill in the game is discovering the narrative, through watching the video clips, and formulating what the narrative is.

There’s a couple of areas that really create an engaging mystery in the game’s narrative, and are backed by the game’s mechanics and design choices. Below are a couple that I thought were particularly effective!

Short / non-linear video clips: Much of the game’s mystery is created through the non-linear / non-consecutive presentation of the video clips, which themselves have been cut into smaller clips to make it harder to piece together linearly. Additionally, given that clips are really only accessible by searching via keywords, it makes it more difficult to piece together a straightforward time-based story. Instead, I found myself relying on certain visual cues to determine time, and later even persona. Some of these cues included the clothes and body language of the interviewee (SPOILERS: for example, Hannah is much more conservative when it comes to talking about her sex life; Eve is much more open and willing to discuss).

Search query interface: Given that videos are only accessible via search queries, as well as the videos being limited to only five per search query, I found that I became more attentive when it came to listening to the interview: I would often listen for certain names and keywords that seemed suspicious or were brought up repeatedly, and mark them down as potential search queries to try next. I felt like this was a particularly effective mechanic as it kept me engaged from the get-go, even before the story became more engaging to me.

Open ended narrative: I think the narrative backing the mystery is really great as well: we never fully get a conclusive answer (what really is the relationship between Hannah and Eve?), and arguably that part of the narrative is more engaging than the death of Simon itself. A big part of this mystery itself is the unreliable narrator of the interviewee(s). [SPOILERS] Players (myself included) to this day continue to debate whether or not they are actual twins, or if this is a case of split personality.

Consistent + relevant themes: I also want to give pretty big kudos to the themes that appear in the interviews, which match much of the underlying narrative and are consistent across multiple video clips. A big emphasis is placed on mirrors and fairy tales. Mirrors are mentioned in Simon’s profession, the events leading to his death, the mirroring of Hannah and Eve as they pretended to be one person, even the palindromic spellings of their names. An obsession with dark and original fairy tales is apparent in the interviews, especially with Rapunzel: this matches Eve’s backstory of being locked up by the midwife in the attic, and the generally dark nature of the mystery.